Helium is the best option of tracer gas in finding leaks because of properties like it is non-toxic, inert, non-condensable, non-flammable and is not usually present in the atmosphere in more than trace amounts (5 ppm). Because of the small atomic size of helium, it passes easily through leaks

A Helium Leak detector which is also called as a Mass Spectrometer Leak Detector (MSLD), is used for locating and measuring the size of leaks into or out of a system or containing device. The tracer gas is introduced to a test part that is connected to the leak detector. The helium that is leaking through the test part gets entered through the system. The partial pressure is measured and the results are displayed on a meter. 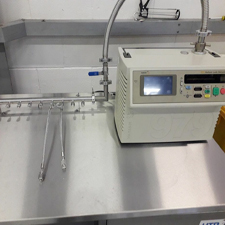