Infrared (IR) technology is widely used in the oil and gas industry as an inspection tool for condition monitoring and predictive maintenance. It is advantageous over traditional visual inspection and other tools because infrared technology does not have to be in contact with the equipment being monitored.
IR thermography is a form of nondestructive testing that measures temperature variances of a component as heat (i.e. thermal radiation) flows through, from, or to that component. IR thermography is also generically known as IR testing, thermal testing, thermal imaging, and IR thermometry.
Thermal radiation is directly related to changes in temperature. In other words, as a component changes temperature, the amount of radiation emitted changes. Since this type of radiation is a form of electromagnetic waves that cannot be seen with the human eye, components have to be analyzed using infrared cameras. Infrared cameras are able to detect and display emitted, reflected, and transmitted infrared energy from an component. The thermal image can then be analyzed to obtain a temperature reading for the component.
The purpose of mapping temperature levels and variances of a component is to detect any hot spots where equipment may weaken or fail. IR thermography is also capable of detecting corrosion damage, delaminations, voids, inclusions, and other flaws that affect heat transfer. However, in order to detect these anomalies, there must be sufficient temperature difference between the component and its surroundings.

These terms are commonly used interchangeably. Although they are related, they have very distinct meanings.

In terms of equipment being tested, operators and inspectors should have working knowledge about the:

If infrared technology is being used to detect flaws, knowledge about the size, depth, and orientation of the anomaly must be known.

Several instrumental factors to consider when performing IR testing include:

IR thermography is utilized in many industries and applications. In the oil and gas and chemical processing industries, for example, thermography can be used to detect piping insulation issues, fluid levels, or identify trouble spots where rotating equipment is experiencing too much friction. Furthermore, IR testing is commonly used to locate hot spots and anomalies such as voids and inclusions. The benefits of IR testing include extended equipment life, decreased unscheduled shutdowns, reduced risk of equipment failure, and increased performance. 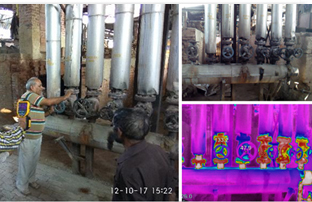